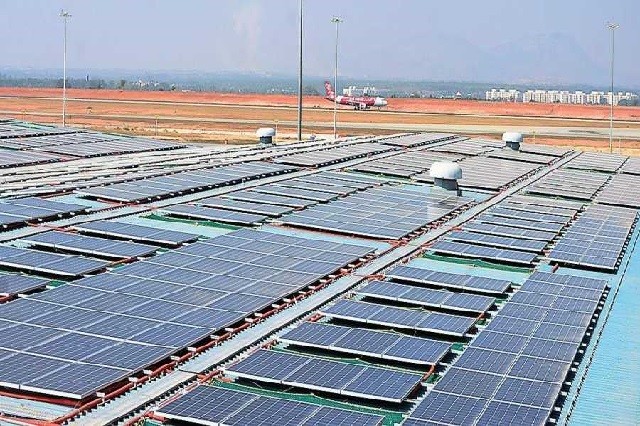 BENGALURU: A rooftop solar plant that can generate 3.35 MW of power for Kempegowda International Airport and generate 47 lakh solar units annually was inaugurated on Wednesday.The plant, installed by Sunshot, will help reduce 3,800 tonnes of carbon dioxide emission annually, said an official release. It has been set up across eight rooftops within the airport premises, including that of Air India SATS, Coolport and Menzies Bobba.

“The contemporary design ensures that the glare of the sun is not reflected, thus avoiding any visibility intrusions in aircraft operations,” the release said. Lakshminarayan S, vice-president, Engineering & Maintenance of Bangalore International Airport Limited, said, “The airport is well on course towards achieving its goal of becoming 100 per cent powered by renewable energy by 2020. These solar projects will help BIAL reduce its carbon footprint and achieve energy neutrality.”

BIAL has taken numerous sustainability initiatives. Rainwater harvesting ponds are being built on nearly 70 acres of the airport campus, which will help generate 1.6 million litres of usable water each day in the future. Six old wells have also been rehabilitated.

The airport will be powered 100 per cent by renewable energy by 2020. Streetlights, perimetre lighting and airfield lights have been converted into LED lighting, another release said.   As part of its pro-environment strategy, the airport has eliminated plastic use from its premises. Straws, coffee stirrers, plastic knives, spoons, forks and polythene bags are banned at the airport.

BIAL is also developing its own Solid Waste Management facility. It wll help in processing 20 tonnes of waste per day, which can be increased to 60 tonnes a day if required.